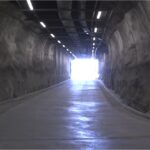 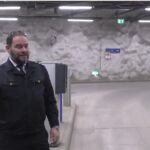 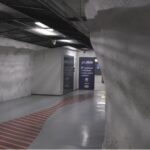 “The Helsinki bunker that can withstand a nuclear strike amid Finland Russia tensions over Nato bid”
“38.420 Aufrufe
26.05.2022
The Sun
2,97 Mio. Abonnenten
A corridor equipped with solid-steel doors can take one straight to the lower levels of a Finish underground shelter that the government has been utilizing as a sports facility.

With blast-proof walls and bunkers and toilets, the Hakaniemi emergency shelter was built in 2003 and is one of many in the capital to provide cover for the city’s 650,000 residents.

Journalists on Wednesday were offered a glimpse of the facility which emergency service officers say can house up to 6000 people and can be used to shield even from a nuclear attack.

The tour came just a week after Finland officially submitted their bid to join NATO, a decision spurred by their alarm over Russia’s invasion of Ukraine.

“Most of our shelters have dual use, so for now it is an as a sports center by
legislation…”
“So ,it is this isn’t a hotel, we don’t have a breakfast buffet we provide
the necessities to keep you alive.”

“”Most of our shelters are from the sixties and the seventies and this is one of the newest ones, from 2003. The construction is still the same, but this is cleaner and one part of why this shelter is still reasonably clean after 20 years of use is that we have the dual use purpose. So, the entrepreneurs who are renting this space are keeping it clean,” explained Tomi Rask, emergency planning officer at Helsinki Rescue Department.

“It is impossible to say 100% sure that we can absorb this and this much of weapon effects, but it is calculated to the highest of forms of protection,” he added.”

“When the sheltering system started in Finland in 1920s, the main point was to keep you alive, not to keep you entertained, so it is rough, it is really rough, if we
need to shelter.”