“There is in some cases of observing a relationship of 4D SPE astral infection and 7D Crucifixion Implants. In the case study of LR, the SPE nest was removed in conjunction with left side Crucifixion Implants removals.
.
Important Notes
SPE are jelly fish, spider or crab grass like blobs with “tentacles” that are genetically engineered by the NAA militarized Archons to implant the side (lateral) head of the target, and can be either right or left or both sides. They eventually move into other parts of the body through the central nervous system… they wither away and make them easier to pull out like half-dead weeds.
They seem to be related to the C1/C2 dislocation at the back of the cranium and spine, and crucifixion implants. These implants seem to make their removal much more difficult, so when the Atlas adjustment occurs and there is a systematic release of the crucifixion implants, these jelly fish creatures are much more easily pulled out at the side temporal lobe. So a part of the issue is waiting for the person to evolve to a point where they can participate with their own spiritual growth, and recognize these creatures, otherwise pulling these out can feel like a violation to the body. …
Observations of AI
When they grow they have a life cycle similar to a jellyfish, the central organism creates pods, so you can have something like a family of SPE creatures, a large Parent hub with smaller children pods. These pods are deposited in areas of the meridians to control the CNS.
The main Parent Hub seems to always be located in the temporal lobe above the ear, either right or left side.
The tentacles can grow down the spine and neck, and will create muscle stiffness, pain, headaches.
They can jump on to people that are vulnerable to mind control, like massage therapists or other practitioners not advanced in shielding or aware of the NAA agenda.
People with these tend to act erratic, may be responsible for personality changes and eventually in advanced stages become automatons.”
“False Ascension Matrix
Heavy coordinate points that cross into and flood the energy tributaries into the Axiatonal Lines from the 4th and 7th Dimension are being repaired. Since the planetary 7th dimensional axiatonal line is the main disruption of the false christ Crucifixion Implants this has been a primary repair project. The 7th ray (Violet RayFlame) is transmitted through the planetary 7th Axiatonal lines and is being recoded. Previously this false crucifixion energy implanted in the 7th Axiatonal line was feeding another false program being used in the Astral plane which was like a mirage. This mirage I have referred to in previous articles is the “False Ascension Matrix” Program. This is why the 4th (Astral Plane) and the 7th dimensions (violet flame and Planetary Logos/group mind) are so important in how they intersect and feed the levels of false (enslavement) programming.” 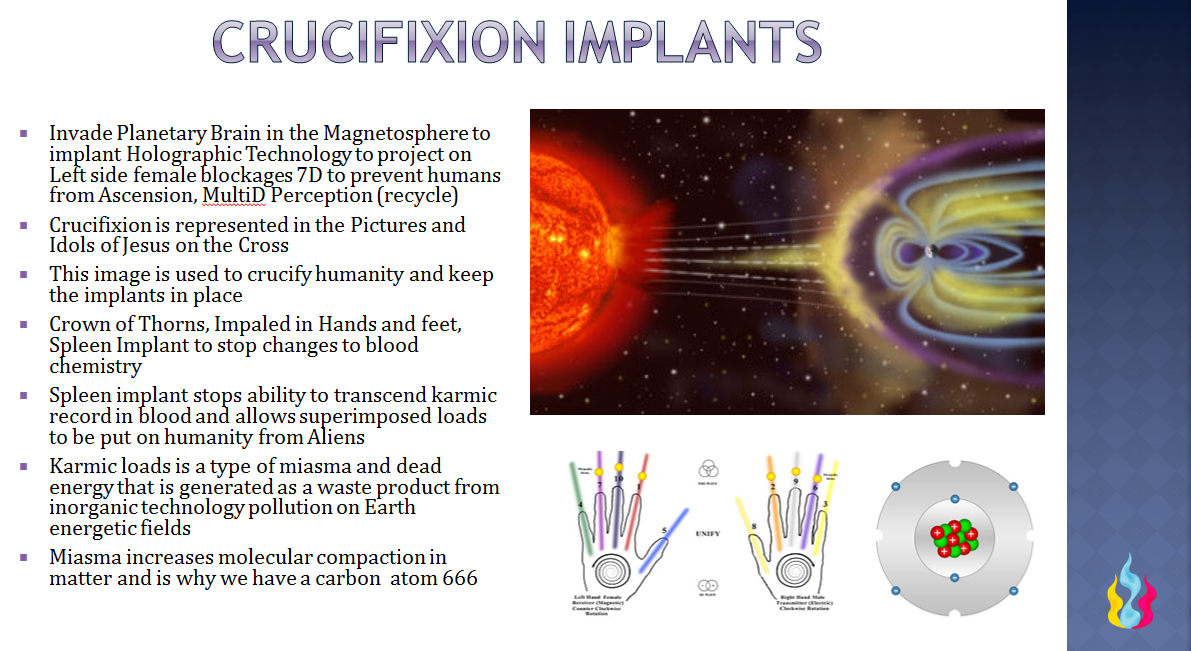