FBI SPILLS THE BEANS ABOUT UFOS AND OTHERWORDLY BEINGS

“CONSPIRACY
FBI SPILLS THE BEANS ABOUT UFOS AND OTHERWORDLY BEINGS”
“There is no secret anymore that governmental agencies are keeping matters regarding otherworldly visitors out of reach, but the FBI has recently initialized an attempt to redeem their name by declassifying a fully documented report about UFOs and intelligent being from other dimensions that have been visiting Earth.
Numerous scientists from different institutions have recently implied that there could be other worlds co-existing with our own. Today, there is a heated debate about whether or not otherworldly beings are visiting planet Earth. There’s more to this topic than it may seem, as many people consider the possibility of those beings already residing on our planet. There is much room for speculation, but one thing is clear – they have been visiting us for thousands of years if not more, and they are still flying their crafts throughout the planet on a daily basis.
What they are exactly, or from where they come from remains yet a mystery, but it appears that several governmental institutions are slowly preparing the ground for a massive disclosure. Why are they not hastening things up, you might ask? Simply because they don’t consider the world to be ready for total disclosure. But there’s a slight progress that has been done by the FBI towards admitting that aliens are more than just a speculation.
The FBI actually admitted that interdimensional beings are visiting us regularly, and they even showcased a bunch of files from the past that show clear UFO activity. It comes as a surprise for the UFO community to see a governmental agency trying to play on our side, but when considering that such reports of unidentified flying crafts account thousands of years back, we can see why they are trying to make people aware. After all, the recent globalization has brought all the desired and undesired information together for everyone who is interested to just grab it and analyze it. On an overpopulated planet, this is actually a worrying fact. Just imagine if the next day you woke up, the internet would be full of leaked extraterrestrial evidence. How will the world act then? Will they conform to the new world understanding, or will there be chaos as all other rooted beliefs are falling apart?
There has been an unexpected progress towards disclosure. In 2011, a special FBI report dating from 1947 has been declassified and thrown into public grasp.
The “special” FBI agent who wrote the report was a lieutenant colonel whose identity remained anonymous for obvious (national security) reasons. The agent had a pile of data gathered throughout many years of investigating the UFO phenomenon.
According to the “declassified” files, various extraterrestrial beings have been reaching out to us for time immemorial. These beings not only came from outer space, but also from different dimensions co-existing with our own. Human beings have been in contact with them for ages, but for unknown reasons, >THEY< decided to follow >their< own destructive path and keep >their< mouths shut about these otherworldly visitors. Below you’ll find a transcript with some of the most valued details from the FBI report: Part of the disks carry crews, others are under remote control Their mission is peaceful. The visitors contemplate settling on this plane These visitors are human-like but much larger in size They are not excarnate Earth people, but come from their own world They do NOT come from a planet as we use the word, but from an etheric planet which interpenetrates with our own and is not perceptible to us The bodies of the visitors, and the craft, automatically materialize on entering the vibratory rate of our dense matter The disks possess a type of radiant energy or a ray, which will easily disintegrate any attacking ship. They reenter the etheric at will, and so simply disappear from our vision, without trace The region from which they come is not the “astral plane”, but corresponds to the Lokas or Talas. Students of esoteric matters will understand these terms. They probably cannot be reached by radio, but probably can be by radar. if a signal system can be devised for that (apparatus) Addendum: The Lokas are oval shape, fluted length oval with a heat-resisting metal or alloy not yet known the front cage contains the controls, the middle portion a laboratory; the rear contains armament, which consists essentially of a powerful energy apparatus, perhaps a ray. Apparently, many species have been visiting us, most of them sentient and capable of sustaining contact with humans. The reason why they didn’t reveal themselves to us is because our governments may have a secret pact with them which only allows to reveal their kind when the time is right (when our species is considered mature enough). (http://in5d.com/fbi-confirms-beings-are-visiting-us-from-other-dimensions/)”
Source: https://ufoholic.com/conspiracy/fbi-spills-the-beans-about-ufos-and-otherwordly-beings
Source: https://vault.fbi.gov/UFO/UFO%20Part%201%20of%2016/view
“vault.fbi.gov:104.16.42.71
# Query terms are ambiguous. The query is assumed to be:
# “e / CLOUD14” 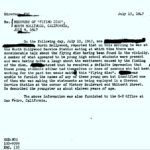 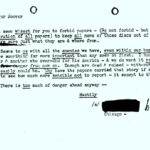 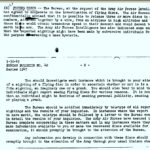 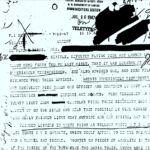 “Memorandum 6751 is a US document dated 8 July 1947 that was declassified in year 2010, and disclosed to the public from the FBI archives. The memorandum acknowledges the existence of alien presence. Former FBI officer John DeSouza, author of The Extra-Dimensionals: True Tales and Concepts of Alien Visitors points to the memorandum as a significant document in ufology.
…
Memorandum 6751 remained classified for sixty-three (63) years until Executive Order 13526[1] which allowed for its declassification and release. The memo may not be a “smoking gun”, but it is significant in that it remained untouched from the disinformation campaigns of Project Grudge, Blue Book or Red Book.
…
Overview
Memorandum 6751 discloses the presence of supernormal beings from another world “which interpenetrates with our own and is not perceptible to us.[Line 5] The region from which they come…corresponds to the Lokas or Talas. Students of esoteric matters will understand these terms.”[Line 8]”
…
Source: https://ufo.fandom.com/wiki/Memorandum_6751