Archontification of the Planet Earth via Smart Dust

Conspiracy Revelation: 4.5.2018: This topic refers to every living biological organism, despite the fact that the AI Smart Dust System is naturally optimized to subdue, sabotage, steer and control the majority of the human race into a swarm cyborg beehive system. It is what I call archontification of the Planet, I invented this term, because it is easily understandable, especially for all the Gnostics who know about the Aim of the Archons to turn all biological organisms into synthetic creatures. Obviously the Gnostics were the closest to the Truth, from all prophetic apocalyptic scriptures, therefore I also refer to the Mass Kundalini Awakening as the Mass Awakening of Sophia – the Goddesss – who now activates to enlighten about the mess that has been done with the human race on behalf of the Empire of Corporate Criminal Global Shadow Government and on behalf of the Fraudulent Military-Medical-Clerical-Alphabet-Media-Gang Oil-Banking-Nuclear-Imperial-Pharma-Na-Zionic megalomaniacal conglomerate of Artificial Life.
He knew already more in 2008 than most know in 2018..2008 I personally started noticing the take-over of the entire Planet via the Alphabet Gang and Military Medical Corporate Technofascist conglomerate and their alliance to the Ruling Crime Cabal via HTTP-Packet inspection and HTTP Forensics, especially of Google inbetween Traffic..but already 2005, it was clear that their process to pathogenize and control the entire globe and transform the whole human race showed obvious signs via Nanotech-Fibers that the natural body didn´t want to absorb, so their dna-rna-splicing system was still imperfect and it was used as a weapon system against millions of innocent test subjects aka targeted individuals by the world ruling corporate governmental highly invasive end-criminal reesearch and development faction. Naturally Morgellons is not a natural appearance, but a U.S. Gov artificially engineered synthetic organism and what we also could call an advanced Bioweapon, like certain widespread standard virus variants of HHV1, HHV2, HHV3, HHV4, HIV and other mixed parasitical pathogens like mycoplasma, morgellon fungus and Lyme. Recently (April 2018) Facebook even showed advertisings on how to create and order your own Lentivirus (Bioweapon), that is pathocratic medical fascist insanity beyond belief.
Basically most of the pathogens one can let check by a medical doctor via blood test are artificially generated diseases by the pharma mafia and corporate governmental crime cartel and by the military pharma nazionic pathocracy, often times referred to as Project MK Naomi and MK Ultra.
//
“https://rarediseases.info.nih.gov/diseases/9805/morgellons
“(See Actual NIH webpage regarding Morgellons (April 2011))”
“Please Note: Remember that this above image is only a photo of the former page. It was removed from the internet, cached copies and all by the end of July, 2007. A new page without the Morgellons reference has taken it’s place.
This page was meant to be forgotten and called a mistake.
from http://www.morgellonsexposed.com/1q42NIHFullPage.htm”
“01/27/2008 Update
This webpage was found by a Morgellons sufferer and posted to several Morgellons related websites to inform the public.
Upon the page being discovered and posted the CDC and/or the NIH immediately removed all copies of this page. Cached copies of the page also disappeared within days. To date there has been no official denial of the information contained on the webpage. Due to the absence of an official press release the public is left to ponder the meaning of the page.” 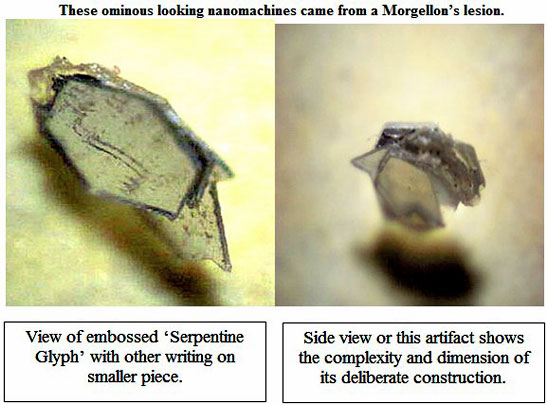 “Multiple objects of the same kind have emerged from their body. The nanos that are being found have an ominous quality about them. When touched with a pin the object began to glow. The center is a hexagonal crystal and the dark jagged plate is reminiscent of something out of an evil tale. The pouch with the “V” at the bottom is highly fluorescent and multicolored. The back of this complex piece of technology has the glyph of a Serpent and writing on it.
These are not made by Mother Nature. It is terrifying to know they are in your body.”